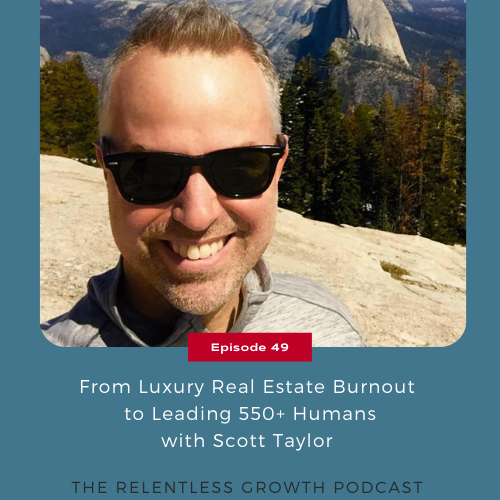 As a second-generation realtor whose career has included nearly every aspect of real estate brokerage, Scott Taylor knows what it takes to succeed in the space. He has received numerous accolades, has worked as a Keller Williams team leader, and is currently the Operating Partner for the Keller Williams Columbia Market Center. Despite his natural talents and real estate prowess, Scott reached burnout in 2011, and after taking a year off, he decided it was time to turn things around and align with his purpose: helping people reach their potential. In today’s episode, we hear about Scott’s journey and how he went from making one of the biggest sales in Denver in 2011 to shutting his business down later that year. He talks about what he learned from his sabbatical and why that year, where he was not helping others, was so unfulfilling for him. We talk about his decision to re-enter real estate after thinking he had left it behind for good. While Scott is no longer on the sales side of things, he puts a great deal of time into his leadership skills and helping his team flourish. Scott highlights the importance of taking responsibility as a leader and the value of being a lifelong learner, even in an executive role. Rather than wanting to be the smartest person in the room, Scott always seeks to put himself in growth situations where he will push through to the next level. We also touch on why self-confidence is key and how Scott opens his clients’ minds when it comes to scaling their businesses. Be sure to stay tuned to the end, where Scott shares some exciting positions he has available!

“When things aren’t going right, I have learned to just immediately look in the mirror.” — Scott Taylor [0:27:05]

“Leadership to me is helping other people get to where they want to go, get to their potential, and that’s what I love doing.” — Scott Taylor [0:28:55]

“The level of knowledge and expertise that I have today only got me to where I am today, and it’s unlikely to get me to where I want to go.” — Scott Taylor [1:00:56]

The One Minute Salesperson

Already heard about the 24 Hours to Freedom Mastermind?

Get in early and grab one of the 12 spots!