EP 4: Building a Multimillion Dollar Business at 24 Years Old (from an RV) with Bryce Wilson 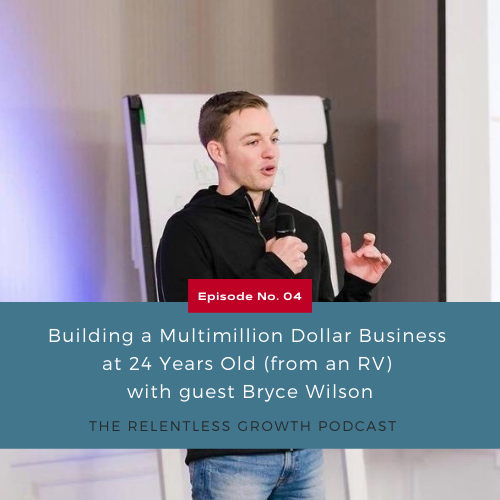 Life is always going to present you with challenges, and how you handle them goes a long way in determining your endpoint. These obstacles can either be insurmountable or opportunities to learn, regroup, and try again. Today’s guest, Bryce Wilson, is an outstanding example of what it means to take on a challenge and continue to grow, and all at the age of 24! As the founder and CEO of two multimillion-dollar businesses, Bryce has learned more lessons than most do in a lifetime, and he is not slowing down anytime soon. In this episode, we gain insights into Bryce’s entrepreneurial journey, including his very own Ticket Rescue’s founding story and its subsequent pivot in the face of the COVID pandemic. It could have been easy to throw in the towel, but Bryce’s faith in himself, his team, and their resources made the shift not only smooth but also incredibly successful. This deft ability to make such a quick transformation can be attributed to Bryce’s insatiable desire to learn. He is constantly working on himself because he knows that as an entrepreneur, you can only give from a full cup. Bryce sheds light on some of the self-development practices that ground him so that he can be at his best. Throughout the conversation, Bryce highlights the importance of working on overcoming limiting beliefs and truly believing that you can have it all. If you are feeling stuck and without options, Bryce’s story of crushing fear, thinking your reality into existence, and an unrelenting commitment to growth is for you.

– Rapid-fire with Bryce: Where he’s from, why he lives in an RV, and more.

– How Bryce has used intentional presence to take things as they come.

– Bryce’s advice for people who are young and getting started in business.

– Ticket Rescue’s founding story and the pivot they have made in light of COVID.

– What Bryce’s girlfriend, who is traveling with him, does in linguistics and coaching.

– Surprising pivotal moments in Bryce’s growth journey and the importance of stepping back.

– How Bryce realized that he was holding on too tight and he needed to let go.

– Some of the limiting beliefs that Bryce has had to overcome.

– Bryce’s desire to have it all and understanding that we can have whatever we want.

– Hear how Bryce perceives fear and how he uses it as a compass rather than a deterrent.

– Bryce’s terrifying encounter with a tarantula hawk wasp in Sedona!

– Why Bryce likes to be in the background as a leader and build others up instead.

– Learn about how Bryce keeps his team engaged and gets them tied into the company vision.

– Fully embody what you want to be until you get there!

– What personal growth work looks like for Bryce and some tools and practices he uses.

– Why putting yourself first is the least selfish thing you can do.

– What Bryce is reading and the two standout books that have changed his life and business.

– Final words of encouragement from Bryce for anyone facing personal growth hardship.

“I really think the only limits we have are the ones we put on ourselves. So, I try to take those off as much as I possibly can and figure out what limits, what limiting beliefs are holding me back in my own mind. And if I can work through those, there’s probably not much else that’s going to hold me back.” — Bryce Wilson [0:05:49]

“I want to have the widest impact that I can possibly have. I want to reach the most people at the deepest level, and I am very aware that I cannot do that on my own. My one mind, one brain, one body will only take things so far, and in order to spread that message far and wide, I need help.” — Bryce Wilson [0:17:36]

For the Love of Money

Sam Walton: Made In America

That Will Never Work

The War of Art