EP 30: From Rock Bottom to CEO with Tara Smith 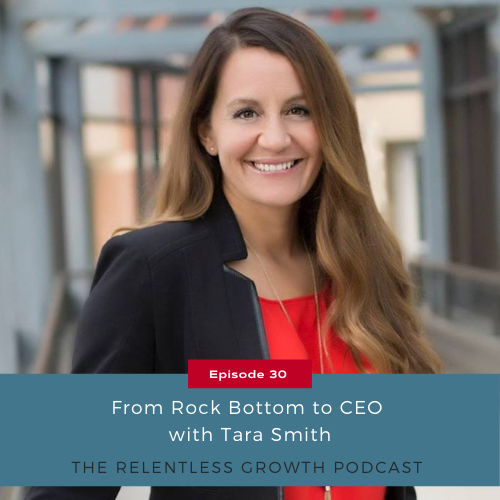 Sometimes all we need is for someone to stand up for our greatness and show up just how much we are capable of when we cannot see it ourselves. Tara Smith, today’s guest, had hit rock bottom, going from a Team Leader at Keller Williams back to being an agent. For so long, she felt that there was no way out, until her colleague, Scott Toombs, asked her whether she would consider becoming a MAPS coach. This simple question reignited Tara’s spark and desire to help people be the best version of themselves. Tara is now the Operating Principal and Team Leader in the Keller Williams Cincinnati team as well as a Leadership Coach. In this episode, Tara sheds light on her journey and does not sugarcoat the dark growth stages she went through. She shares some serendipitous encounters, phone calls, and full-circle moments that showed her just how important her faith is. Tara knows that her life did not turn out this way by accident. It has been through intention, action, and accepting that failure is inevitable, that she has found success. She talks about the importance of reflecting on your goals and why it is ok to shift the goalposts. We wrap up the conversation by discussing leadership, where Tara reflects on what makes leaders great, along with the legacy she hopes to leave behind. Be sure to tune in today!

– Get to know Tara and the many hats she wears as a business owner, speaker, and mother.

– Tara’s ‘aha moment’ when she realized that she could make an impact through real estate.

– Why coming to this realization was so emotional for Tara.

– Failure is necessary to succeed, so you have to accept it as part of the journey.

– How being a team leader led Tara to hold herself to a different standard.

– The darkest day of Tara’s life and why she still celebrates it every year.

– Doing the work: what Tara set out to do after stepping down as team leader.

– Getting invited to BOLD and how it gave Tara the first glimmer of possibility of a brighter future.

– The story of how Tara became a MAPS coach, an opportunity that allowed her to thrive.

– The passion you put into things brings other opportunities.

– Tara’s advice for people who are struggling to implement their plan to move forward.

– The story of how Tara got a call to be a team leader in Cincinnati five years after resigning.

– For Tara it is not about selling houses; it is about caring for people.

– What Tara is up to now and the gratitude she feels for achieving her goals.

– Why developing young leaders is what excites Tara most now.

– It is all about adding as much value to people as you possibly can.

– The biggest mistakes that Tara has seen leaders making.

– Tara’s belief that no matter who you are or where you are at, you need a coach.

– The legacy Tara hopes to leave behind through impacting people.

“I’ve always had this burning desire to impact people and I never really figured out how to do it.” — Tara Smith [0:05:58]

“The people that are really, really successful, they’re just like everybody else. They just said yes more times when other people said no.” — Tara Smith [0:07:58]

“I could come in and out of my workplace all week and not talk about selling houses. But I do come in here every day with a desire to change people’s lives and change how they think.” — Tara Smith [0:38:13]