EP 23: How to Become (and Parent) True Champions with Kirk Mango 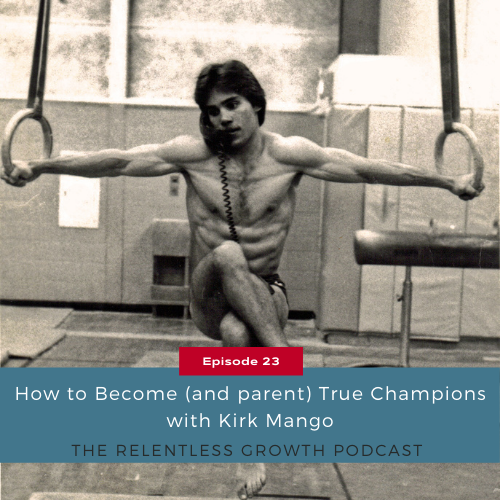 In this episode, listeners can look forward to hearing from Kirk Mango, a champion athlete, and coach who also happens to be Chris’s father-in-law. Kirk was a Division 1 gymnast, a two-time college All-American, two-time Northern Illinois University Hall of Fame member, and he still holds the Northern Illinois record for the highest score on the still rings. In addition, he was the head coach of three Elite Eight gymnastics teams, was awarded the Illinois Coach of the Year in 1992 for gymnastics, and has coached athletes who received All-American Hall of Fame and All-American team awards. Kirk has been a guest speaker on the radio, news television shows, sports podcasts, and at schools, where he encourages children to become champions from the inside out. His book, Becoming a True Champion: Achieving Athletic Excellence from the Inside Out, features endorsements from people like Nadia Comaneci and Steve Weatherford. After 34 years of teaching, Kirk recently retired and, together with his wife of 36 years, raised two children who are also Division 1 athletes. Kirk talks to Chris about how he developed a champion mentality despite adversity and before he had seen any results and explains that winning is not a necessity, even though it can be a by-product of this mindset. It is not the outcome but the process that develops the resilience and grit necessary to be truly successful at anything. The two also get into the importance of taking personal responsibility, practicing what you preach, and teaching children that they are in control of their futures.

– How the champion mentality is part of Kirk’s identity and woven into every part of his life.

– The pivotal moment when Kirk was inspired by the outstanding skills of another gymnast.

– Kirk talks about getting into the sport much later than most other star gymnasts.

– How he started cultivating a champion mentality and identity before he had any results.

– Understanding that truly successful people focus more on the process than the outcome.

– The risk of focusing too heavily on winning: you become greedy and want it at all costs.

– How Kirk overcame the obstacle of being physically smaller than his peers in high school.

– Facing adversity and distinguishing between the things that you can and cannot change.

– The choice you have whenever you are confronted with other people’s negative opinions.

– Advice for making big decisions and taking personal responsibility for your circumstances.

– Examples of the kind of practices a person can implement to grow as a person.

– Chris talks about Kirk’s mindset of being your best at whatever you do, even in retirement.

– What readers can expect from picking up the book, Becoming a True Champion.

– Growing in credibility by living the values you preach and setting the example.

– Advice for parents who are struggling to get their children to embrace the process.

– The importance of taking advantage of things while the opportunity is there.

– What Kirk would like to tell his future grandchildren about his growth journey.

“When you use these two terms together, champion mentality or champion mindset, it has a lot less to do with winning than what people might think.” — @KirkMango [0:10:37]

“I believe that mentality is not something that you are necessarily born with. Everybody has got tendencies and can lean one way or another. We all have genetic characteristics. But, to me, that mentality is built.” — @KirkMango [0:16:47]

“The way you think and what you believe determines the actions you can take. It is those actions that then move you toward the outcome you want.” — @KirkMango [0:42:46]