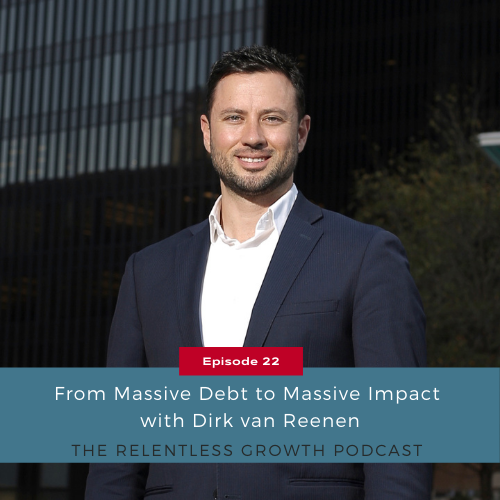 Although hard work is the cornerstone to success, it is only one part of the puzzle. You need to lead with a servant’s heart and have the desire to elevate those around you. One of the finest examples of this kind of leader is Dirk van Reenen, father, award-winning entrepreneur, international business consultant, and speaker. Along with launching and selling several startups, he was also one of the top brokerage CEOs for Keller Williams, where he led one of the fastest-growing real estate brokerages globally. Despite achieving the goals he had always worked toward, Dirk felt drawn to help small business owners, prompting him to launch his human systems development company, BERGflow. In this episode, we dive into Dirk’s background, where we hear about his colorful journey to success. From owning a ski shop to being $300,000 in debt to finding Tony Robbins, Dirk has done and seen it all. We talk about the value Dirk places on learning and why – even though he is at the top of his game, he has increasingly adopted a student mindset. This humble, egoless approach means that Dirk knows what it takes to get the best out of his teams. He realized he does not have to be the smartest person in the room, but understands how to get everyone to perform at their best. We hear Dirk’s team-building insights and why he believes you will never achieve financial freedom if you do not understand your team members at their core. Wrapping up, Dirk shares why he decided to call his business BERGflow. Tune in today!

– Chris is taking on 2021 clients, so go fill out an application on his site if you are interested!

– Get to know Dirk, his background, and what he is up to now.

– The importance of taking the time to reflect and celebrate where you are.

– Why Dirk believes it is so common for entrepreneurs to feel like failures.

– It is not always easy to know what is holding you back until you do the work.

– The enormous value that comes with being excited about being a lifelong student.

– Dirk’s view of learning and how his understanding of education has evolved over time.

– Why the traditional way of learning often sets people up for failure.

– Dirk’s must-reads and why believes everyone should read Think and Grow Rich annually.

– Hear Dirk’s winding journey to success and the way he has embraced mistakes in his life.

– The story of the ski shop Dirk ran in his 20s and the debt he racked up in the business.

– Some of the sacrifices Dirk made and the difficulties he faced after the ski shop’s foreclosure.

– The power of having the right team around you and the leverage this gives you to scale.

– Dirk’s tips on finding the right people and how to find roles for people on your team.

– The skillset that high-level CEOs have that warrant their high salaries.

– Actionable steps you, as a leader, can take to connect with the people on your team.

– What Dirk would say to leaders who believe they don’t have the time to put into their teams.

– To make a change, your actions have to align with your decisions.

– Dirk’s ‘why’ and what drives him to help small business owners: A deep sense of purpose.

– Hear about Dirk’s decision to call his business BERGflow.

“High levels of success are not that sexy. It’s actually really boring. It’s putting your head down and pushing hard enough to break through that ceiling.” — Dirk van Reenen [0:10:16]

“The people that succeed ultimately are the people that always adopt the mindset of being a student and learning more about who they are and the journey they are on.” — Dirk van Reenen [0:16:16]

“Today, I’m still learning and studying harder than ever before because I realize that if I want to continue to go to the next level of success in my life, I have to continue to learn. I’ve got to continue to think differently.” — Dirk van Reenen [0:35:58]

“Without even understanding who your people are at a core level and what they’re about and what they want, it’s going to be really hard for you to pull them together as a team and create alignment.” — Dirk van Reenen [0:46:33]

“By working with people that want to elevate as leaders and pour into others, that’s how we’re making our mark.” — Dirk van Reenen [0:54:07]

The Fish That Ate the Whale