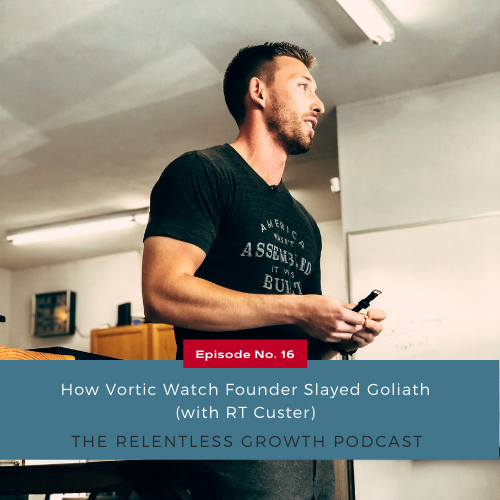 The path of a young entrepreneur is one fraught with challenges and the unknown, and RT Custer is a shining example of someone who has journeyed fearlessly and hopefully, coming up against almost unimaginable odds on the way. RT is the co-founder of Vortic Watch Co., a truly remarkable company who craft beautiful, custom watches in the US. Vortic Watches has been featured in The New York Times, The Boston Globe, NPR and on Fox for their work in preserving United States history. RT’s vision for the company was one where a watch was made in the right way, with the care and precision that excellence requires. He co-founded the company while still in college and we get to hear all about this remarkable origin story and the ethos that underpins the beginning of a beautiful project. Notably, Vortic and RT have been embroiled in a long legal battle over the last five years and our guest does a great job of sharing the particulars of the challenges he has faced as a result of the trial. We speak about what this has meant to him and the ways in which coming up against the bigger powers in the world forces one to grow. Through these tribulations, RT has stayed committed to doing the right thing and believes the results of his actions are proof of his good karma. We also speak about trusting the process and why being a grumpy business owner is taking the easy way out! RT is so generous with the lessons he has learned, whether they are around the networking he has worked at tirelessly or slowing down to be present in a particular space, there is so much to admire and absorb in this wonderful conversation, so be sure to join us and catch it all!

– A little bit about RT’s personal background and family life.

– Decompression rituals, staying sane, and being present in any given place.

– RT’s vision for his company and the mission of creating a destination out of Fort Collins.

– The commitment to manufacturing in the right way — why RT set out to create a truly American-made watch!

– Getting a team on board and performing at the peak of their ability.

– Transparency and honesty; disinfecting with exposure to sunlight.

– Vortic’s massive, David versus Goliath, legal battle and RT’s side of the long story.

– The ways in which the legal battle has forced RT to grow as a person.

– The source of RT’s strength through the more challenging times: customer feedback.

– Chris’ experience of receiving his own Vortic Watch!

– The care and finesse that goes into the crafting of a Vortic watch and its presentation.

– Personal growth initiatives and the masterminds and groups that have helped RT on his way.

– Pitfalls of business ownership — getting away from easier, avoidant behaviors.

– Looking to the future and the next phase of growth for RT and Vortic Watch Co.

– The opportunities that are unique to the current context — making the most of the moment.

– Where to find RT and Vortic Watch Co. online to connect and purchase a watch!

– Parting advice from RT; what it means it to be a fearlessly positive entrepreneur.

“COVID and all this other stuff that has happened in the world hasn’t touched us, we’re actually doing better than we ever have.” — @VorticWatches [0:15:46]

Already heard about the 24 Hours to Freedom Mastermind?

Get in early and grab one of the 12 spots!