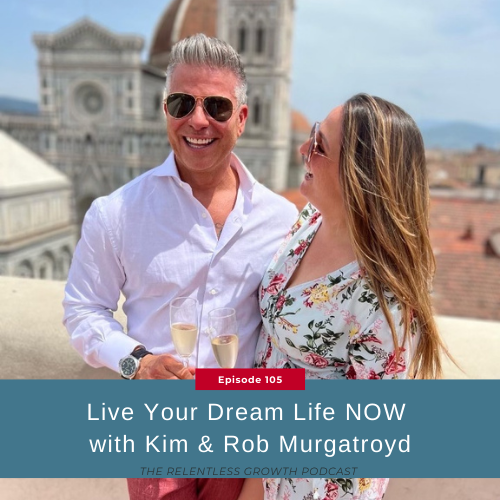 We have a limited time on earth, and many of us spend that time caught in the hamster wheel of the nine-to-five grind. Our guests today are living the alternative. For Kim and Rob Murgatroyd, life comes first, and their income streams exist to support their dreams. In fact, you may already know Rob and Kim from social media and their inspiring travels around the world! Rob is a former chiropractor and the creator of the Work Hard Play Hard Podcast, and, in this episode, you’ll discover how this formidable couple made the dramatic decision to sell their chiropractic clinic and pursue a life of joy, travel, and creativity. We talk about how contrast creates clarity, and what, in the Murgatroyds’ case, gave them the clarity to up and move to Florence, Italy with their seven-year-old daughter. Rob and Kim reflect on “stupid idea time” and how this simple act of dreaming “impossible” dreams changed their lives. We also touch on the magic momentum of decision-making, what tends to interrupt “flow”, the dangers of being addicted to success, and so much more! Tune in to hear Rob and Kim’s awe-inspiring story and their advice on how to wake up from the trance of the rat race and pursue your dreams!

– Rob and Kim Murgatroyd’s life-first approach and what instigated their shift from the rat race.

– How they create multiple streams of income to travel around the world.

– The dramatic resolution to shut their chiropractic clinic and live their dream life.

– How something called “stupid idea time” changed their life.

– What accelerated their move from California to Italy.

– The question Chris asked that gave Rob clarity about his decision to move to Italy.

– How everything lined up to support their life in Florence, against all odds.

– The magic of making a decision.

– The life-changing events Kim and Rob host for business owners around the world: what inspired them, how they’re structured, and the purpose they fulfill.

– Kim’s perspective on addiction to success.

– What interrupts “flow” and creativity.

– How to wake up from the trance of the nine-to-five grind lifestyle and follow your dreams!

– Who said, “I would rather smile in my Toyota, than cry in my Ferrari.”

– Rob’s experience of coaching with Chris.

“Rob and I are obsessed with living our life in the current moment and we are attracted to having multiple streams of income to support that life.” — Kim Murgatroyd [0:03:01]

“Once it became about the addiction to the financial goal, the flow and the creativity shut off.” —  Kim Murgatroyd [0:50:32]

“I want people to understand that they have way less time than they think they do and to wake the f**k up to their lives.” — Rob Murgatroyd [0:56:18]

The Latte Factor by David Bach

The 4-Hour Workweek by Tim Ferris

From Strength to Strength by Arthur Brooks

Keep up with us on social media: