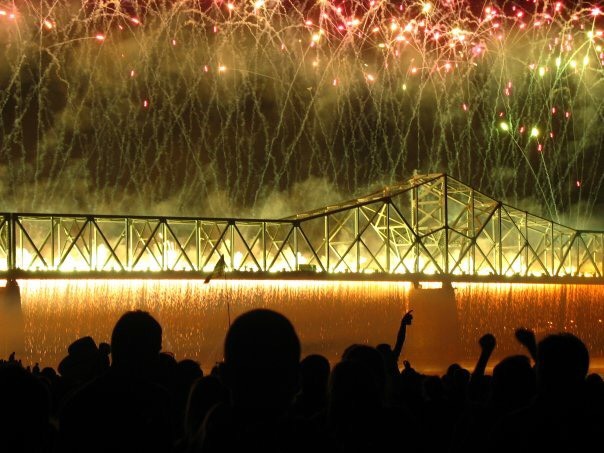 When was the last time you felt really, really, genuinely STUCK?

This has been on my mind for a couple reasons:

(1) Thunder over Louisville is this Saturday and every year I’ll hear the infamous song “Thunderstruck” about 13475 times… Love it or hate it, “Thunder” as we call it here, is a spectacle. The event – not the song. I love the song.

And I actually love the event too. Every year people descend onto both sides of the riverfront to stare in awe at the airshow and the people… There’s no shortage of, umm, “unique” sights to see with both… In the air there’s F-22 Raptors, massive tank-carrying planes, stunts and flybys from other cool aircraft I have to ask my pilot buddies to describe in layman’s terms, and a spectacle of all types of people in all types of situations. It’s fun.

Half a MILLION people will descend onto the riverbanks for this kickoff to the Kentucky Derby Festival. Meanwhile, nearly 100 planes practice overhead, the great lawn preps for chaos, restaurants ready their parking lots, and 2/3 of the region’s Bug Light flies off the shelves in a hurry.

And every year I get excited because it’s a huge party with one of the largest explosives — er fireworks — shows on this little blue planet. For 30 minutes we get heart-thumping, eye-popping, wonder-inducing fireworks for FREE because America is awesome and so is Thunder.

So why is it so much fun?? Aside from the free air show, people watching, and astounding fireworks booming in the sky, it does one more thing to me every year:

It interrupts my pattern.

If I’m feeling stuck in the grind of January 105th (also known as April 21st in Louisville) getting really tired of gloomy weather, and being sequestered indoors too much, Thunder breaks it all up.

When I used to feel stuck at the law firm during Thunder week, planes flew around the Aegon building (now Mercer I think) and were much cooler at 300 feet up. Have you ever seen bombers from 30 stories? Whoa. That’ll distract you from your TPS reports…

Later, when I showed houses and was getting antsy to wrap up the day, it was fun to see kids pointing out fighter planes as they flew overhead before the big show.

And every year, even if I don’t make it down to the riverfront, the energy and enthusiasm of an entire community (a big one) getting together to blow stuff up and celebrate together is just incredibly appealing to me. And it always interrupts whatever I’m doing to stop and appreciate it.

So, you might be curious why I started this blog asking, “When was the last time you felt really, really, genuinely STUCK?” and all I did was talk (write) about Thunderstuff…

Here’s the boom boom part: When we feel really stuck, we need SOMETHING to interrupt our pattern.

Follow me on this… When I say “pattern” I mean the habits we’ve slipped into in our thoughts, our language, our actions (and our inactions), our emotions, our results… ALL of it. We need something to knock us like a 2x4 or a few 150 lb. fireworks shot out of a canon to say “WAKE UP” and “MIX IT UP!”

Otherwise, we’ll be trapped and ThunderStuck. Trapped in whatever mess we feel like we can’t escape. And you know EXACTLY what I’m talking (writing) about…

Ever been in a really, really horrible mood and someone accidentally gets you laughing? While you’re laughing, I’ll bet you aren’t trapped in that horrible mood anymore, are ya?

Ever had someone really reach into your life, right when you were in a dark place or between a tough decision, and somehow they instantly made it feel like it wasn’t that bad after all?

What about really intense pattern interruptors like divorce, death, and unexpected firework mishaps? You see – each day, we fall into our habits and patterns and we don’t realize how crucial they become to how we move through life… Which brings me to #2:

(2) Being able to show people HOW to work with our patterns, our habits, and our interruptions is one of the HUGE reasons I built and launched a new group program called The Phoenix Series. These common themes are pouring out of clients everyday so I know they’re not alone in feeling STUCK. They believe they’re stuck in all kinds of areas of life, or business, or both and they have NO IDEA how to get out of it. So I created a group coaching program to help them learn core mechanics, strategies, habits, and REAL ways to move through this without wasting time, money or effort.

And what are some of the common places folks get immensely, tragically, hopelessly ThunderStuck??

Maybe you’ll recognize the usual suspects: Relationships, money, work/career/a job they hate, feeling unappreciated, frustrated with their progress, unable to manage their time, burned out from solving the SAME old problem day after day after day, never investing any time or money into their own growth or interests, never having fun doing what THEY want to do, and maybe worst of all: feeling unloved or insignificant.

Pass a Bud Light on over why dontcha.

I’m sure it seems odd to dovetail feeling “stuck”, Thunder over Louisville, life coaching, my Phoenix Series program, pattern interruption, and how we can all relate to this in one simple paragraph, but buckle up because I’m about to do it…

We’re all human, and we’re all deeply imperfect creatures of habit. Sometimes those habits get us into trouble whether we realize it or not. And those habits are fine until they don’t serve us, our relationships, or the general good anymore… That’s when we need a pattern interruptor — something to knock us off our rocker and into a better, healthier perspective. Thunder is just one of the fun things that interrupts my patterns and happens to be fun to me. Yet I’ve realized with my clients that it often takes something much more potent than a firework launched out of a canon to interrupt their pattern. They might need ongoing maintenance than an initial explosive reaction. They need coaching. They need a group. So my Phoenix Series program creates a group coaching environment which not only tells you about these kinds of things, it SHOWS you how to recognize them, counteract them, and fight your way into a better life like an explosive Phoenix firing up and creating a new life bursting with the power of 1,000 F-22 Raptors!!

“In order to rise from its own ashes, first a Phoenix must burn.”

Octavia Butler wrote that and it’s part of the inspiration for this coaching program that starts April 23rd. So if you’re feeling Thunderstuck, and you want to feel the burning passion of being able to conquer your greatest life goals, remember this simple thing:

You can sign up by messaging me below, or simply using the link here now:

More details on my Facebook and IG accounts as well.

Get a Free Consult Here